GRRA has the privilege of working with some of the best veterinarians in Atlanta, and we'd like to take this opportunity to spotlight one in particular. On September 14, GRRA rescued a three-year old female Golden mix named Georgia when she was surrendered to the Polk County Animal Shelter. The next day, we learned that Georgia was pregnant and expecting puppies very soon! Lucky for GRRA, Dr. Paul Evans with Crossroads Veterinary Hospital in Woodstock saw our foster plea and volunteered to help. Dr. Evans and his family fostered Georgia, saw her through her delivery, provided her with the very best medical care, and fostered all of her puppies!

With their help, Georgia delivered nine healthy babies on October 11. And today, we celebrated their adoptions at Crossroads! Perhaps the best news of all - Georgia was "home" all along. We are thrilled to announce that Georgia found her forever home with Dr. Evans' family!

We want to extend our heartfelt thanks to Dr. Evans, his wife Eva, and the entire staff at Crossroads for taking such excellent care of Georgia and her litter of nine puppies for the past 8+ weeks. We are so grateful for our partnership with Crossroads and their amazing staff.

Donna Leach, an Adoption Consultant Manager for GRRA, has created a great slideshow highlighting a bunch of our adoptable dogs (as of October 26).

The puppies can walk, have teeth, and love frolicking in their new playground. Support Ella and her puppies by making a donation. Apply to adopt!

Dog of the Month - Darwin 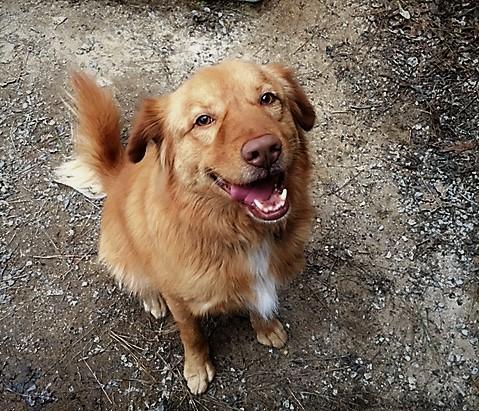 Hi, I’m Darwin. I’m a handsome, fun boy who, after getting time to know a new person, loves to give hugs and play. Because it takes time to get to know new people, it’s best that I’m not around kids. I’m very good with other dogs and enjoy playing with them but could be an “only” kid in my forever home too. I’m very curious with cats but not aggressive or mean. I’m really smart and know several commands like sit, down, come on leash, wait (at the door) and I don’t pull on a leash, good in the car and know how to load up into the truck. I love to go for walks and would make a great hiking companion for the intrepid explorer out there. A fence is preferred since I like to run and play safely and take time to warm-up to new people. I’m a special boy seeking a family who will let me progress at my own pace, who will respect my likes and dislikes and who will devote lots of time to me. If you’re interested in adopting me, please contact GRRA.

Ranger Ivan had a great time at Adoption Day on Sunday. As soon as he realized that a ride in the car was involved and that HE was invited... he wagged his tail with excitement and anxiously stood at the rear (hatchback) of my car as I carried out his bed. When I popped open the trunk, he put is two front paws on the bumper and waited for me to hoist up his rear end. It may not have been graceful, but we made it!

Ranger was disappointed that I hadn't put down all the seats and he was confined to the very rear. He loves to put his head out the window, no matter how cold. During the 30 minute drive to Petco, he mostly laid in the back on his bed, but would pup up on occasion at stop lights. I liked to look in the rearview mirror and see reactions from folks behind me as they saw nothing more than a golden retriever face popping out the back window.

At adoption day, Ranger was full of energy. It's as if he wants to assure folks that just because he's a Grandpa-Dog, it doesn't mean he's going to nap ALL the time. Of course, as I write this, he's snoring with content at my feet.

There were a few applicants that expressed interest in Ranger and, if all goes well, he should be settled in with a new home in the next few weeks.

Dog of the Month - Parker 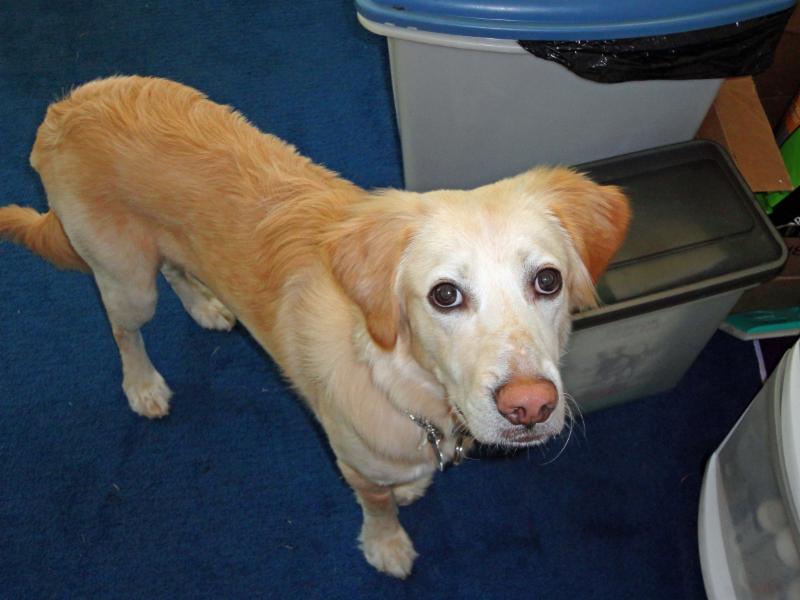 Parker is a 9-month-old bundle of energy in need of a consistent trainer.

His foster reports that, like many Golden puppies, he needs a lot of exercise or he gets very curious about everything and gets mouthy. (And a little mischievous.)

None of this is unusual for a Golden, but it appears he hasn't had any consistency in his young life. He needs someone to teach him boundaries.

When he gets some of that energy out, he is learning very quickly. So his foster feels like he just needs an active family with some good training experience to make him into the sweet Golden we know he can be.

Parker gets along with other dogs when he calms down. (Again. The whole puppy thing.) But the foster doesn't feel like he would need another dog to be happy.

If you think your family has what it takes to help Parker, apply with us today!

Dog of the Month - Abby 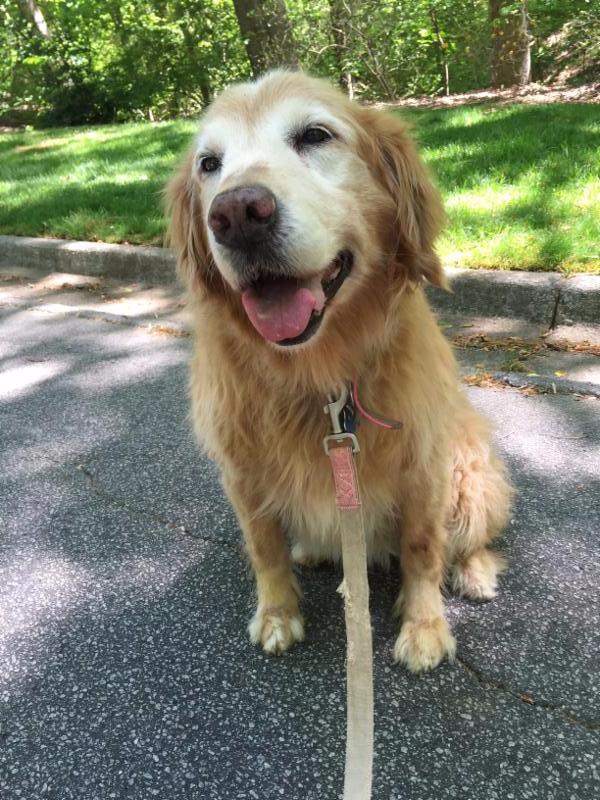 Abby came to us a little overweight and a little achy from being overweight.

When she first arrived at her foster's home, she could barely make it to the end of the driveway. But with some hard work, she is now enjoying nice walks with her foster family.

Because of spinal compression, she's a little shaky going up and down stairs and getting in and out of cars. But with some treatment, nutritional support and a healthy weight, that should improve. 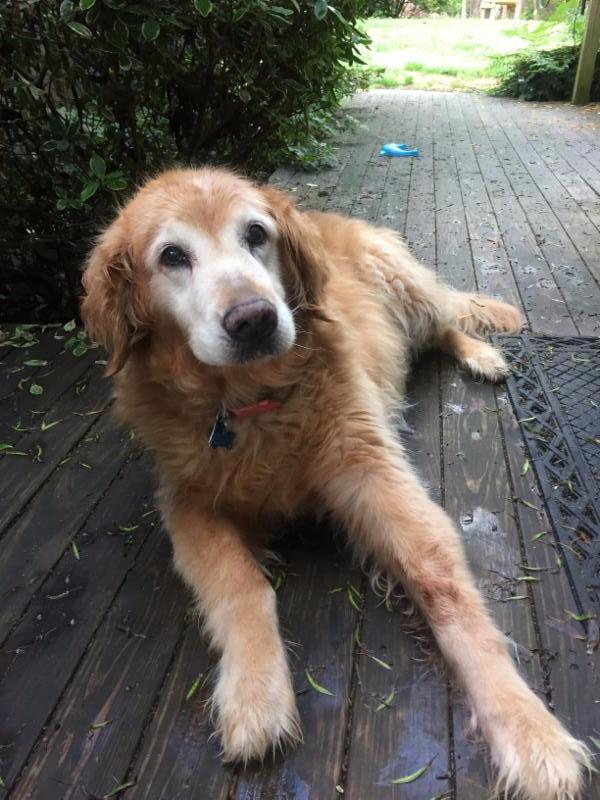 She is quiet, loving and affectionate towards our cats. She would be a great shop dog since she's so calm and loves to greet people! She's also quite happy to just lie on the back deck in the sun all day. Nothing upsets her.

Bath time and grooming is also something she quite enjoys. She's also great with kids and other animals.

This lovely lady is just looking for a great companion to enjoy life with. If you're interested, apply today!

Fosters are responsible for providing information about the foster dog to our Adoption Consultants, as well as evaluating applicants for their foster dog.

Fosters will need to be able to bring their dogs to GRRA's monthly adoption days as well as arrange meetings with potential applicants to meet the foster dog.

GRRA pays for all vet costs and expenses. Dogs typically need to be fostered for anywhere from 3 to 10 weeks.

If you are interested in learning more about becoming a GRRA Foster, please complete our volunteer application at http://www.grra.com/volunteer!.

Dog of the Month - Sam 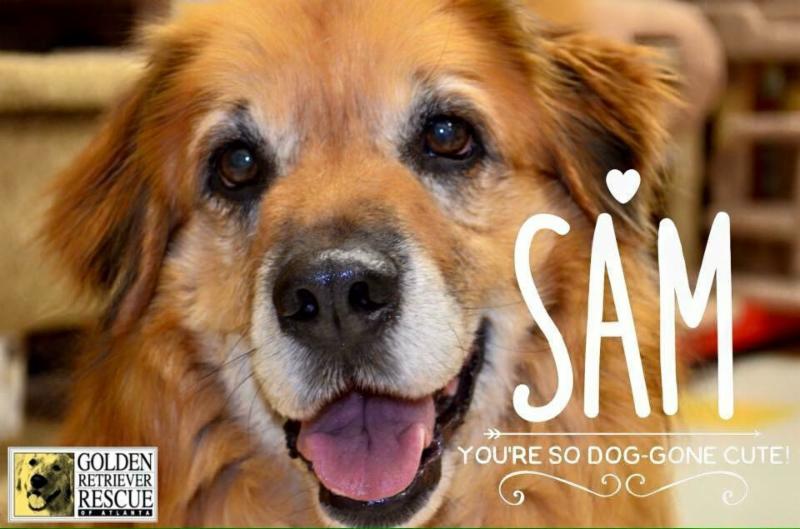 We are quite befuddled. Sam is this beautiful, sweet boy with big eyes and a big heart. But we haven't found him a home, yet. We're hoping that spotlighting him as our Dog of the Month will help him get there.

He ended up with GRRA after his previous owners divorced and left him at a shelter.

He's very easy going. He gets along well with other dogs and cats. He's pretty good on a leash and loves to go in the car.

His ideal home would have another dog and older kids. And because of some arthritis, he would do best in a single story home.

We really believe people are missing out on this amazing dog. If you'd like to be considered for Sam's family, apply today! 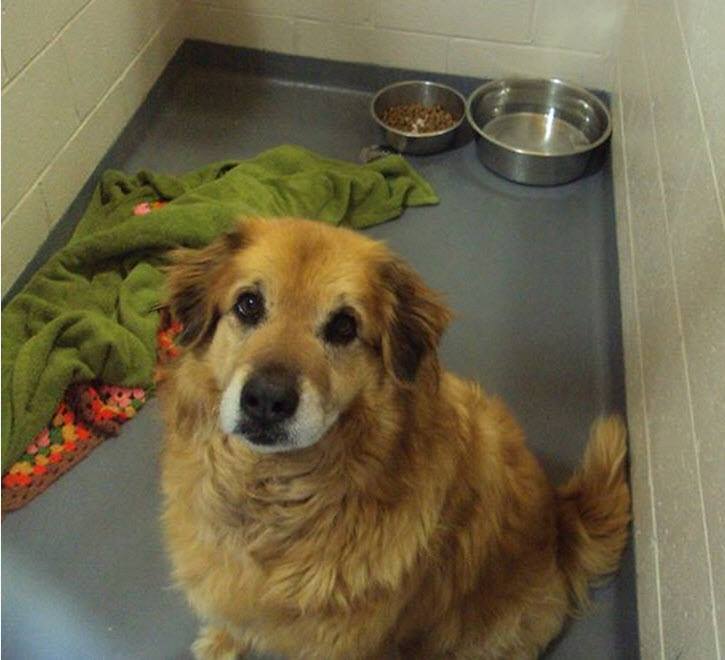 Dogs of the Month - Jax and Kate

Jax and Kate are siblings from the same home who we'd love to get paired in their new home. Their sweet Golden personalities have something for everyone.

Jax is the more outgoing and goofy of the two. He'll step over his sister Kate to be the center of attention. And he loves a good cuddle. 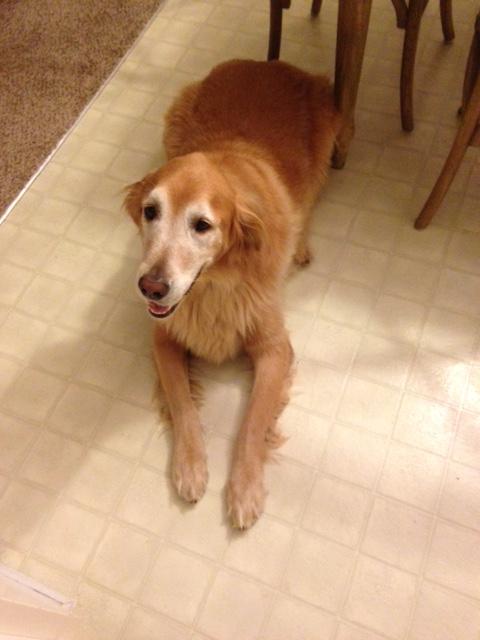 Kate is the typical laid back Golden. She is beyond sweet and loves to be loved upon. 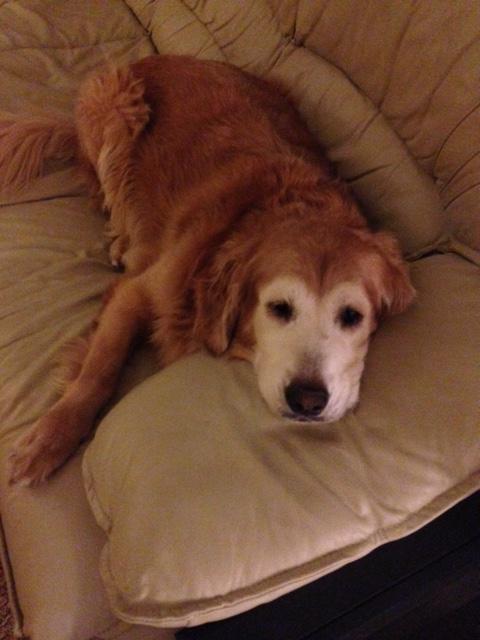 They were both taught fun commands like "bang" for lie down and "go to house" to go to their crates. (Although they don't really need them.) They're very well behaved inside the home.

It's obvious that these two had a very loving home. Any new family would be lucky to get these two.